The Panerai Luminor 1950 Submersible Bronzo is probably my favorite watch. I own a PAM 382 in my private collection and when I look at my watch collection, It's the one that I most connect to in conjunction with the sale of my business. It was the first watch that i purchased immediately after i sold Watch-U-Want and to me it sort of commemorates that sale. The great thing about this watch, is watching the changes in the patina which is one of things I love about this watch. Every-time i look at my personal Pam 382 I just rejoice on what a great company was able to build, that later was able to sell to another great company. 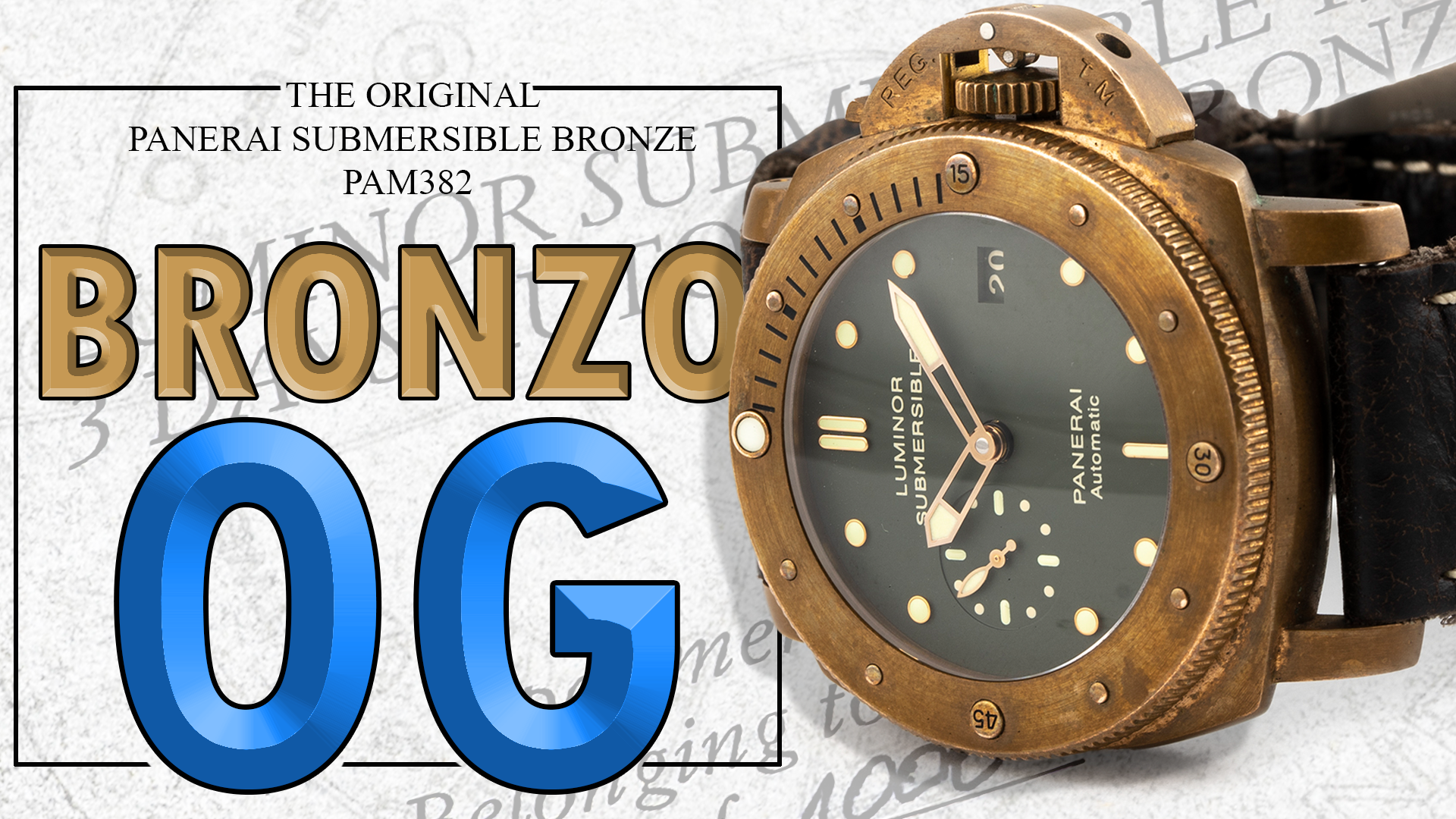 What Makes This original PAM 382 Bronzo aka Bronzo OG so rare and collectible:

Produced in only 1000 pieces for N series, this was the first commercially released watch by any watch brand with a bronze case and it rocked the watch world. I believe they choose bronze in the Bronzo because of the connection to underwater exploration and maritime industries. In fact, bronze is one of the most durable and non corrosive metals that you can find that is used extensively for underwater purposes. Used for making things like piping, fittings and boat propellers because it doesn't corrode but does oxidize. And that oxidation is really just that top layer.

The bronze case is not coated or treated which means it takes on a unique patina depending on the climate you live in and the environment it is exposed to, i.e. salt water, pool, shower, sweat, etc. A number of manufacturers have released bronze watches only to have the case coated with a clear PVD coating or finish that prevents the case from taking on a distinct patina. Each of the Panerai Bronzo watches wears and oxidizes differently but the end result is what I call a 'Statue of Liberty Patina' with flecks of green in the nooks and crannies of the watch, bezel and case-back. And best of all, it's like a living and breathing thing, you can rub ketchup or lemon juice on the case and watch it change colors while you're sitting at dinner. It's like wearing a magic trick on your wrist! 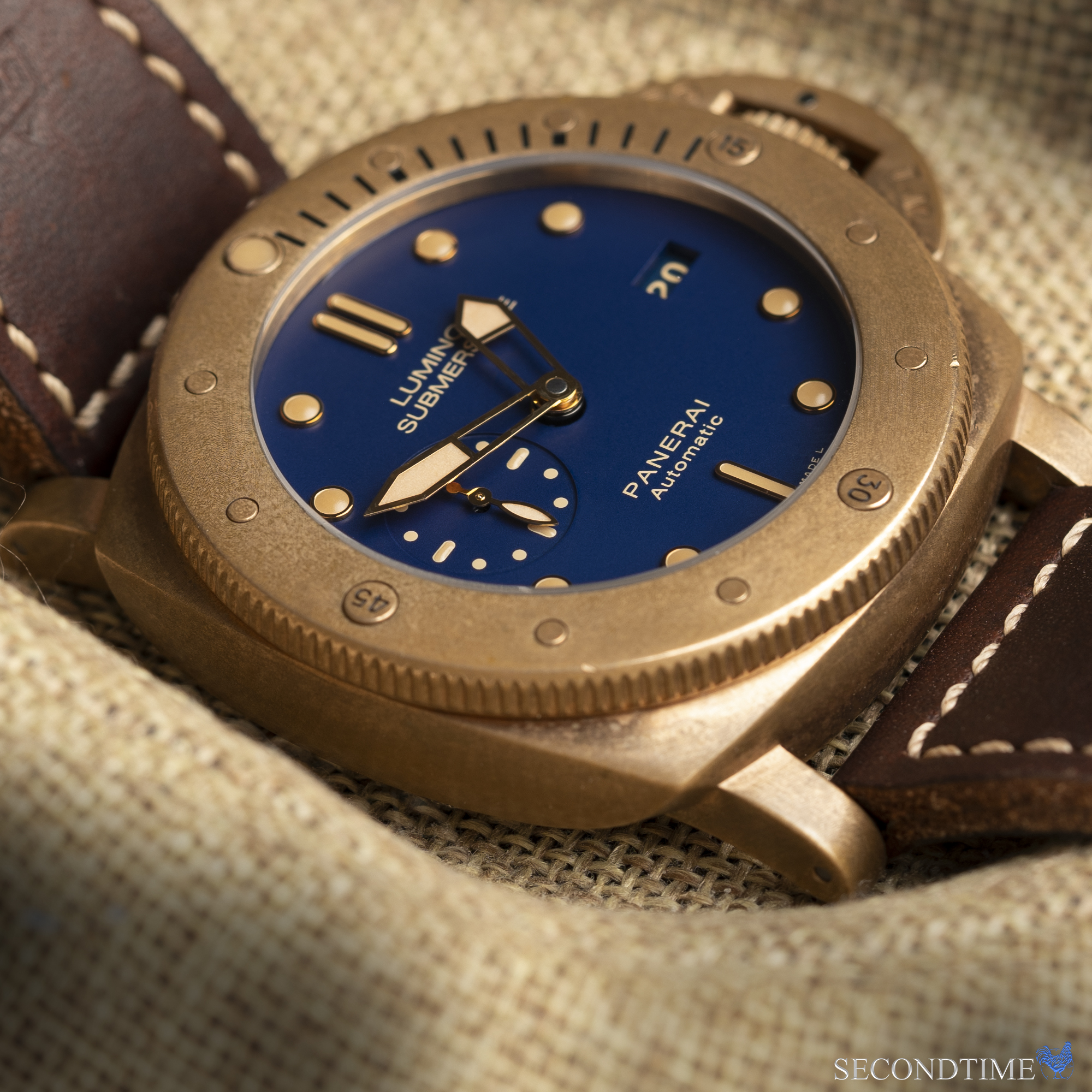 To date there have been 4 Bronzo models produced by Panerai; This PAM 382 was the first and will always be known as the Original or the 'OG Bronzo.' Next came PAM 507 which is similar to PAM 382 in that it also has a green dial but its most significant feature is the 72 hour power reserve indicator on the dial. (Love it or hate it, some have suggested a PR indicator on a Submersible is entirely inappropriate for a Submersible!) Next came the PAM 671 with its Smurfy blue dial. 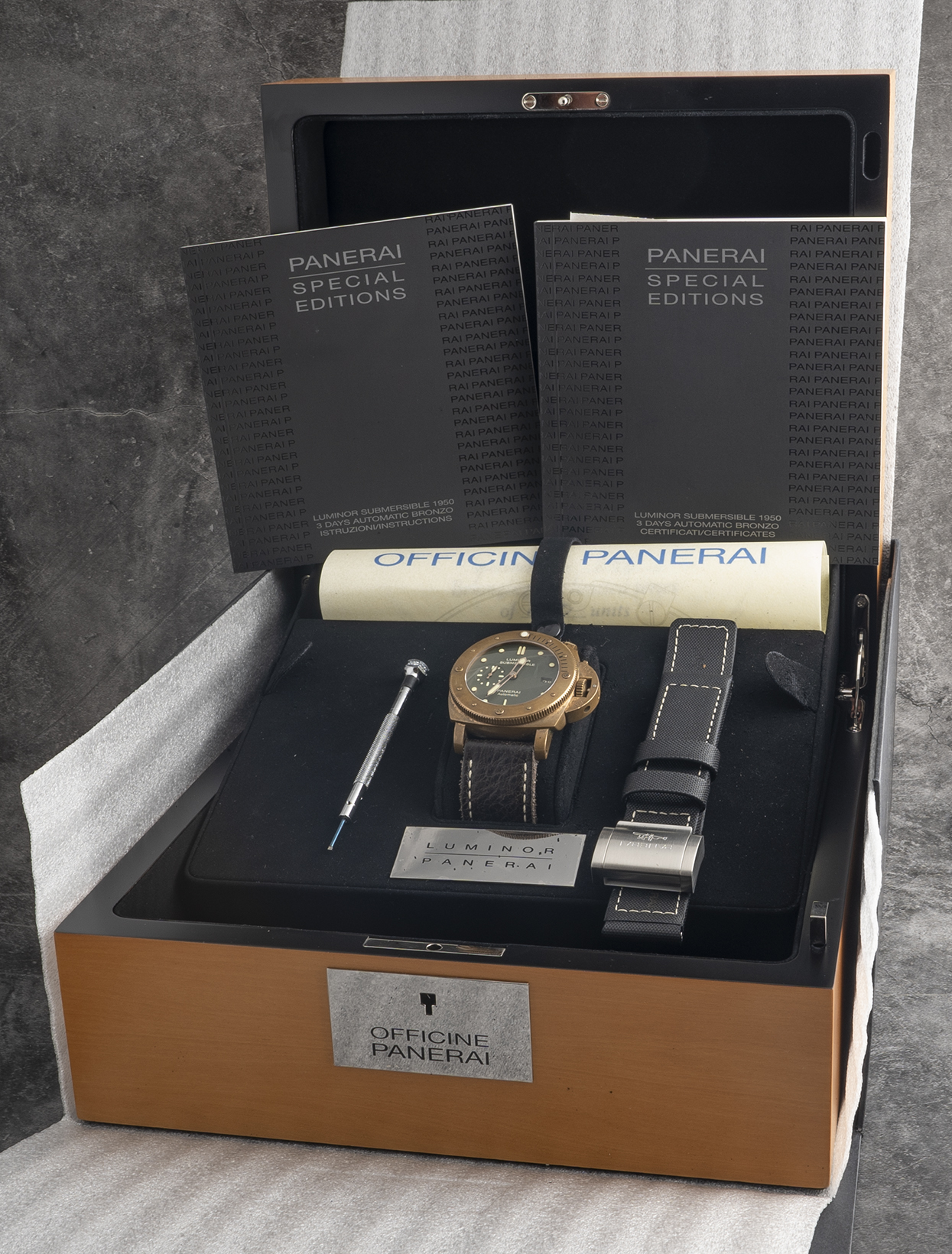 It is important to note that all 3 of these Bronzo's were released as Special Edition watches with over-sized special edition presentation box sets and special edition certificates. As 'Special Edition' watches from Panerai, this guarantees these PAM reference numbers never to be produced again. Think of the special edition as 'retiring of the Jersey' but instead of a jersey it's a PAM reference number. The 4th bronzo released by Panerai is the PAM 968 with brown dial and ceramic bezel insert. Interestingly and for unknown reasons, this Bronzo was released as a regular edition watch which means nothing prevents Panerai from producing this PAM reference indefinitely and in unlimited numbers for the rest of time if they wanted to. All of this translates into the first 3 Bronzo's being the most collectible and rare--but for the die hard Panerai collector, there is only 1 Bronzo and its the OG PAM382 Bronzo! Going off the laws of supply and depend and Panerai's history of releases. You can tell which one I chose by the one I put my money on and which I have in my personal collection. An excellent and complete example of the original Bronzo PAM382 currently listed on SecondTime.com

Which Panerai Submersible Bronzo should I buy?