"¡Ay, caramba!" Where do I start? Lately we have been receiving a lot of vintage watches to stock up our new category the Vintage Corner. I guess you can say I have gotten the vintage bug, but in reality it's hard to capture what's important on a watch if you have no idea what you're looking at. So, my journey into the Rolex Submariner Reference 5512 Bi-color "meters first" gilt 4 lines "Bart Simpson" "Steve McQueen" begins. Candidly speaking, I don't know what to call this Rolex 5512 anymore other than the "King of Cool" (We will touch more on the nickname later). 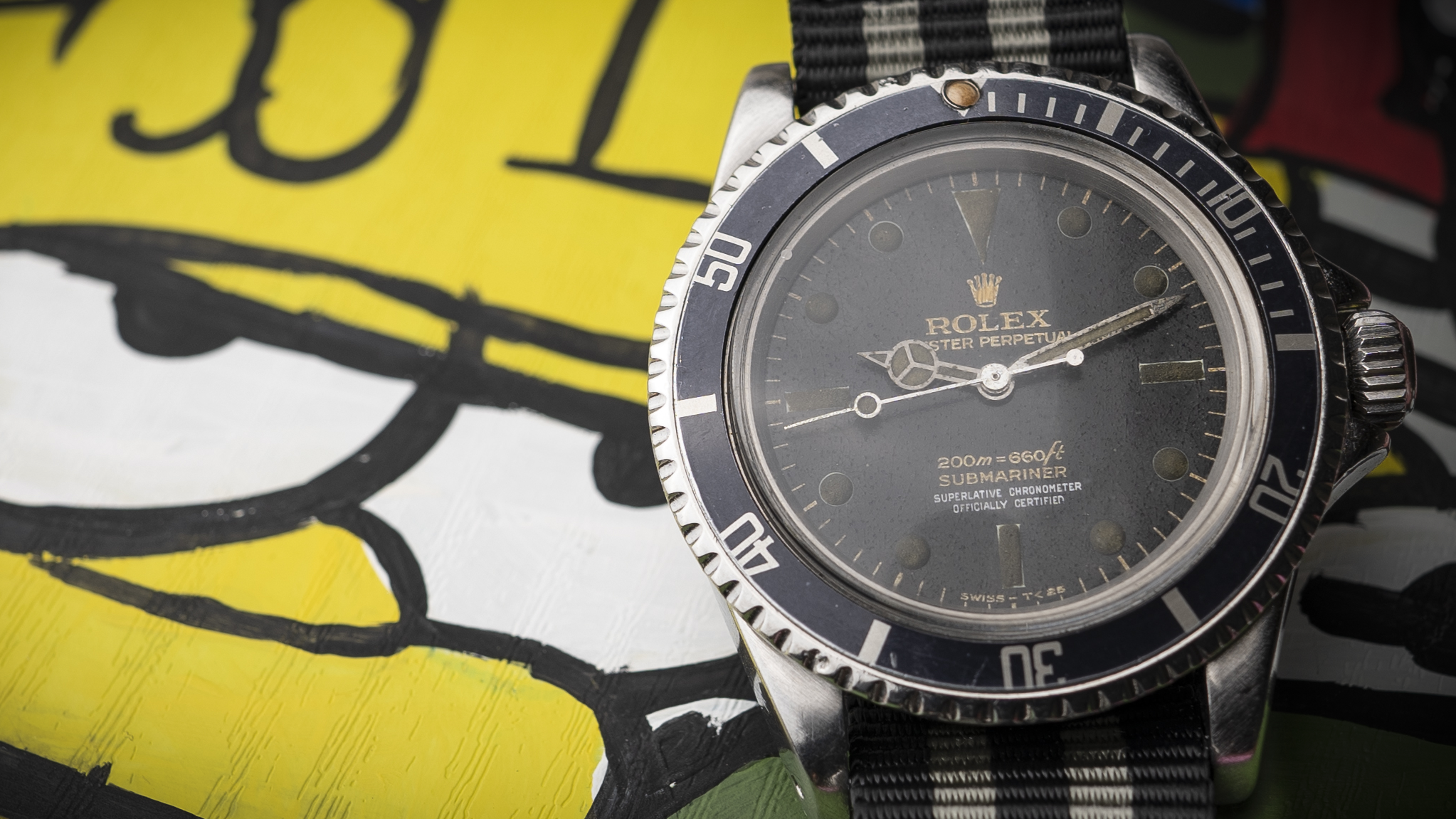 was the First Rolex to feature a crown guard. There were four variations of the crown guard

the new 40mm case, increasing from the previous 38mm model. There were four calibers used in

Caliber 1570 with Hacking seconds. The two differences between 5512 and 5513 other than

being produced in far less numbers, is the 5512 has a COSC (Officiel Suisse des Chronomètres)

rated caliber and the 5513 does not. Which brings use to our next topic...

When released, the 5512 dial displayed two lines of text in meters before

feet format (200m=660ft) (Submariner). Shortly after upgrading to the

certified). The meters first dial was only produced for 8 years between

the "meters first" dial is highly sought after, but don't have a cow man, it 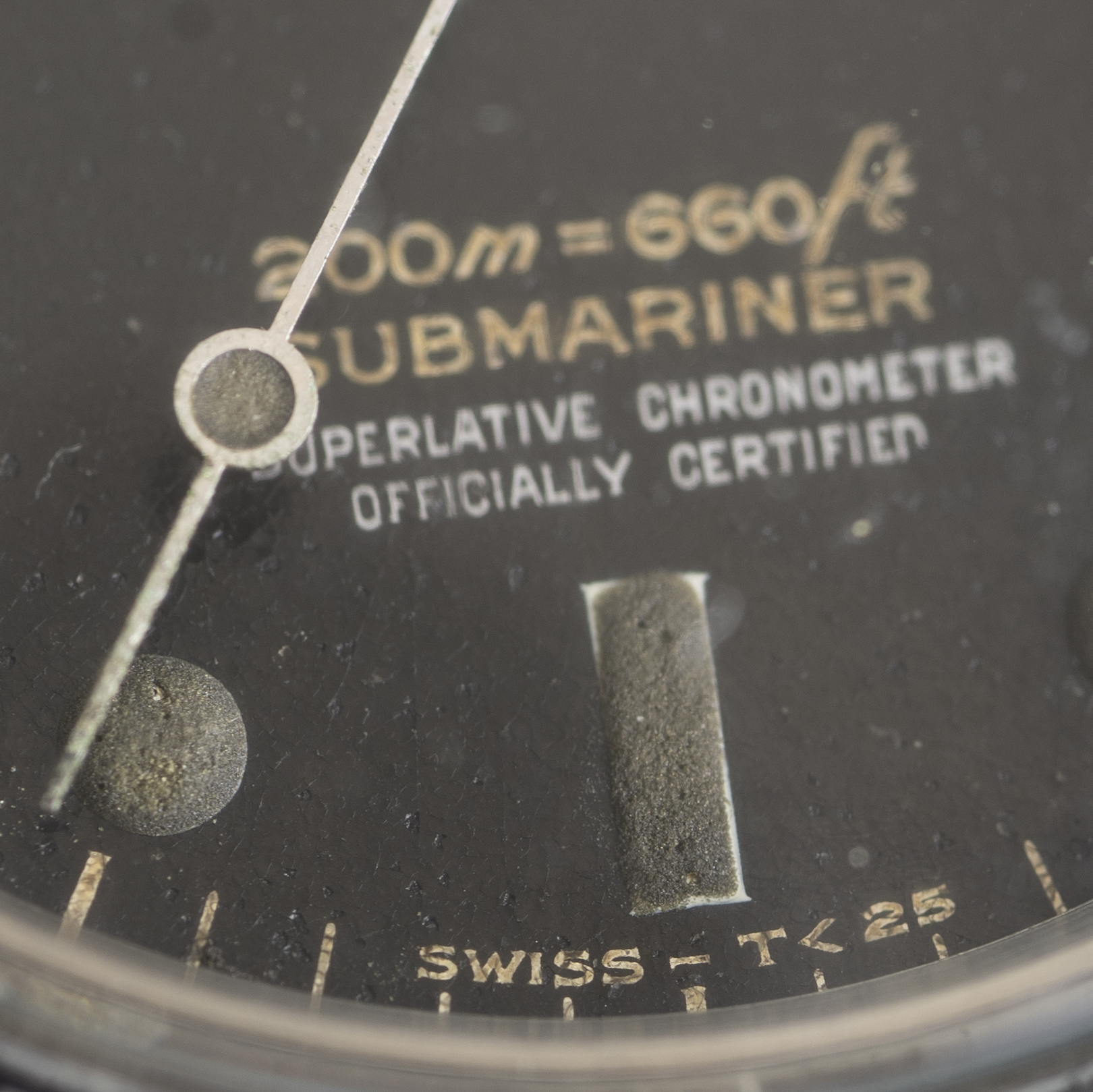 Bart Simpson dials are very rare, but a 5512 with this particular dial is extremely rare. As almost

. The "Bart Simpson" dial also features a different font layout, with the Rolex being a little more

off center to the left. Also the font has longer end stroke fonts and the slash through the "ft." in

(200m=660ft) are in a straight line and not off set like the Bi-Color dial. All "Bart Simpson dials are

a bi-color in a gold-ish and silver-ish color but not all bi-color dials are Bart Simpson. It is believed

the Bart Simpson dials were only produced in 1966. In my extensive research, I was only able to

find less than a handful of the true 5512 "Bart Simpson" dials. 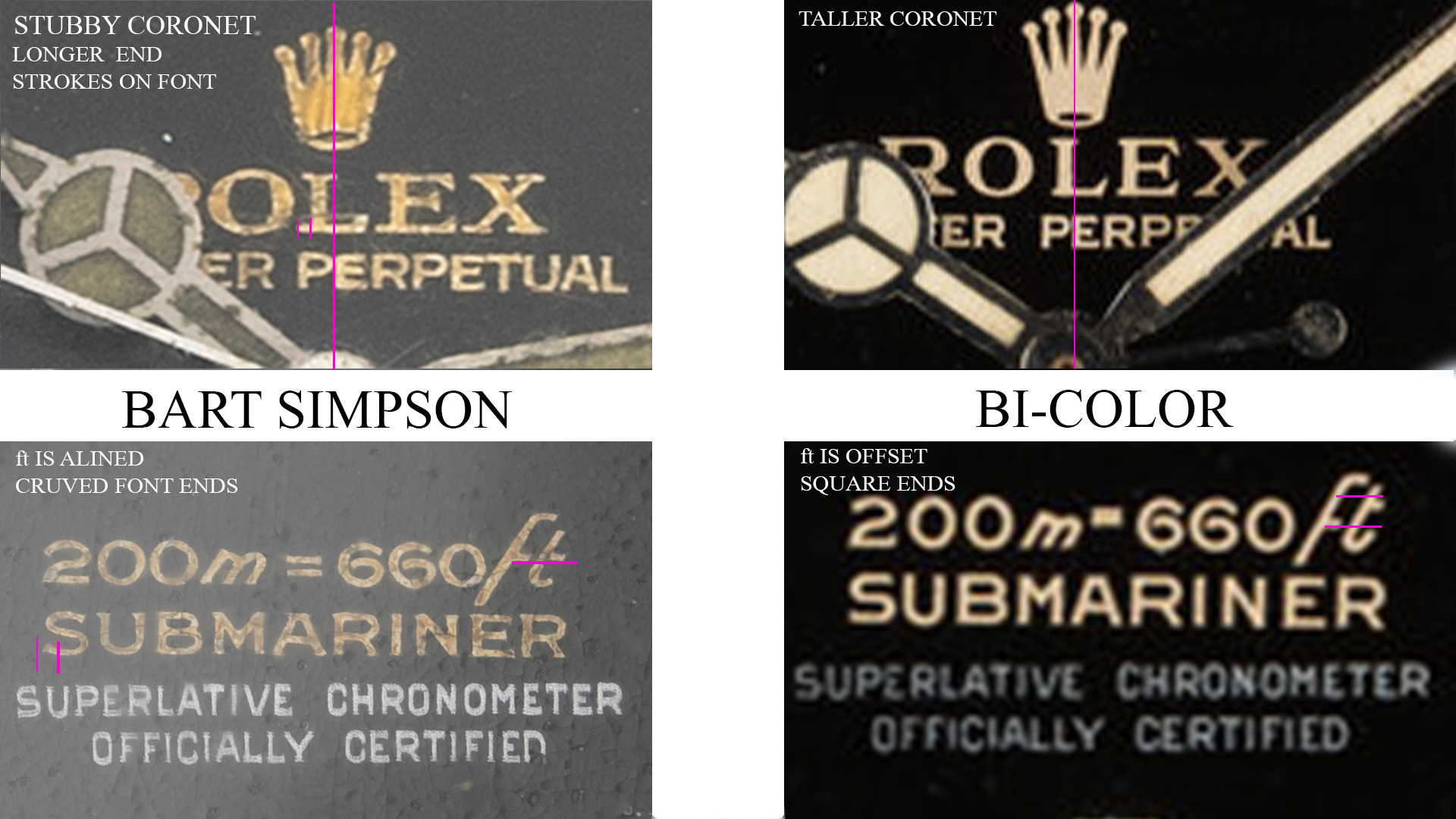 This particular "Bart Simpson" gilt dial is untouched, and shows beautiful aging. The hands on the

dial of this era were normally produced in steel and are proven to oxidation, for this reason the

hands were commonly replaced. Another feature that was commonly repaired is the tritium plots,

due to flaking and poor lumination. This "Bart Simpson" dial remains untouched and Tritium plots

aged to almost a ghost black, while the gold-ish color coronet and text has aged into what

resembles a gorgeous honey Onyx look. So to find an untouched 5512 with a Bart Simpson dial 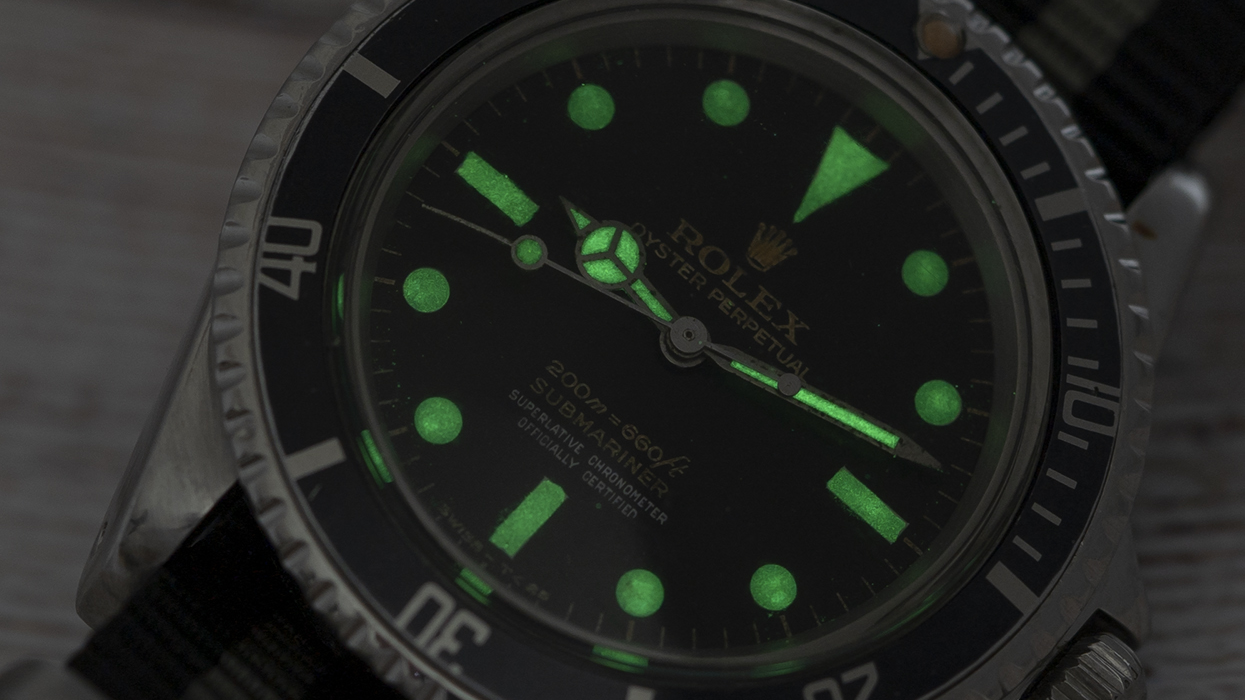 **Disclaimer this image was enhanced to show consistency in the tritium plots. The image was taken in complete darkness after being charged with a UV light. The lumen was extremely fiat and dissipated in under 25 seconds**

Steve McQueen AKA "King of Cool"

When people speak of the "Steve McQueen" Rolex, the first model that comes to mind is the

Rolex 1655 Big Orange Hand GMT. But in fact till this day, there are no known images of Steve

McQueen ever wearing a Rolex ref 1655. There is plenty of the "King of cool" sporting a

Rolex 5512 on his right arm. Given that Steve McQueen wore a Rolex 5512 and this being an 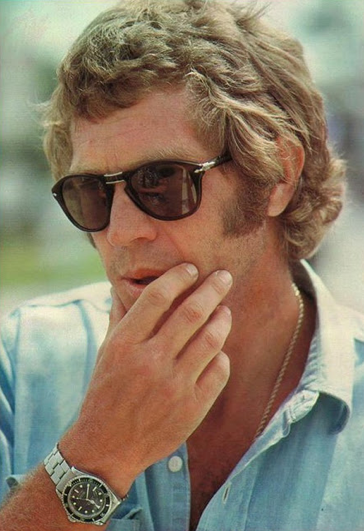 Simpson. Let's take a look at the Cool-O-Meter and see what went into play in order to have a

true Rolex Ref 5512 gilt meters first Bart Simpson. As you can see by the chart this timepiece was

right in the middle of a transition year and used parts mostly from previous configurations. Being

produced in the last quarter of 1966. Furthermore, it makes me strongly believe that most of the 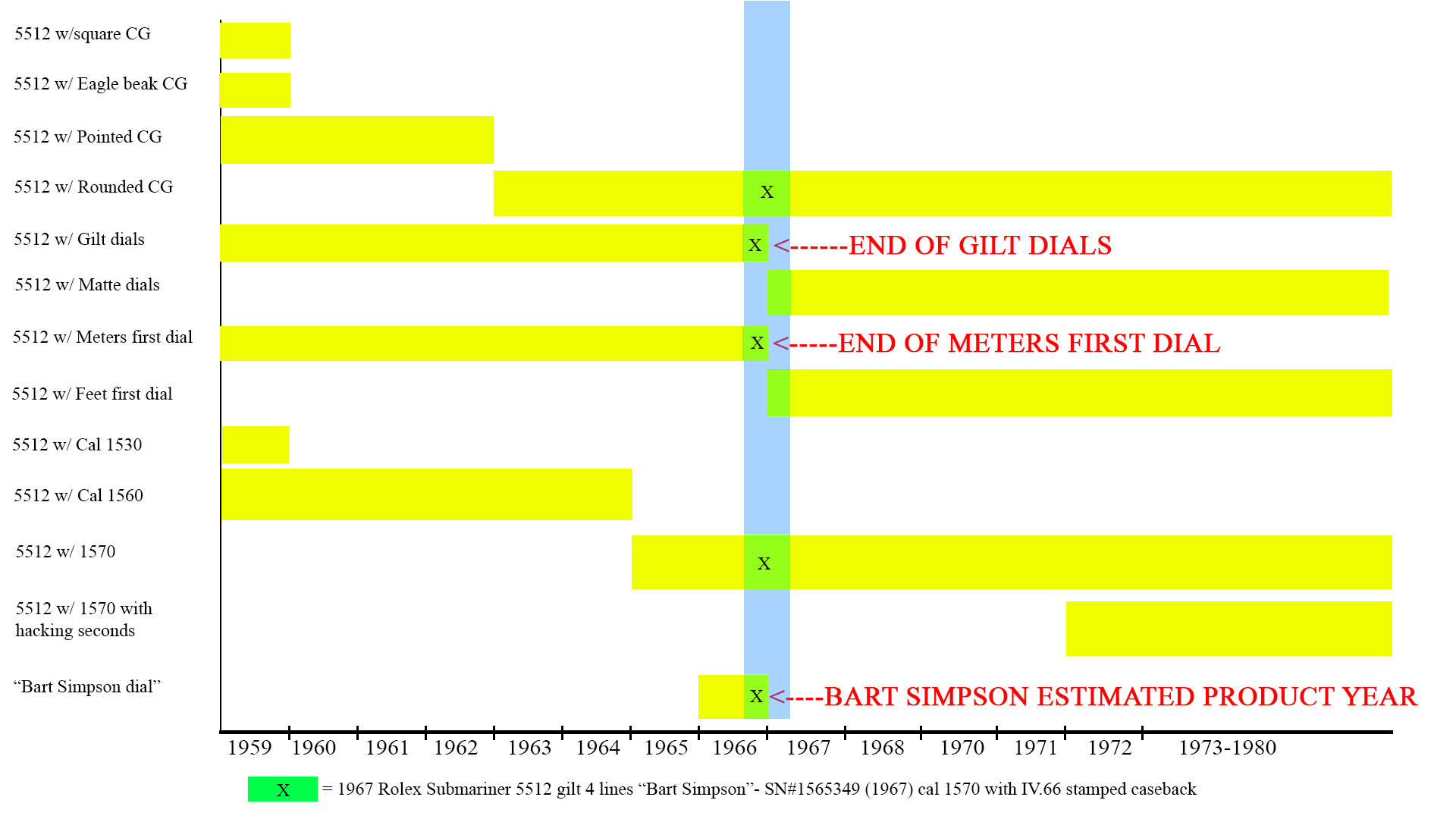 color" "Bart Simpson" untouched dial and it makes it a rare timepiece.

Call it whatever you want, but we will continue to call it the "King of Cool".